The term Equine Gastric Ulcer Syndrome has been around since 1999. EGUS is an umbrella term and it simply describes diseases of the stomach. We, as veterinarians really need to break this down into a specific diagnosis of Equine Squamous Gastric Disease & Equine Glandular Gastric Disease. Both are distinct entities with very different risk factors, treatment protocols and management factors to consider. 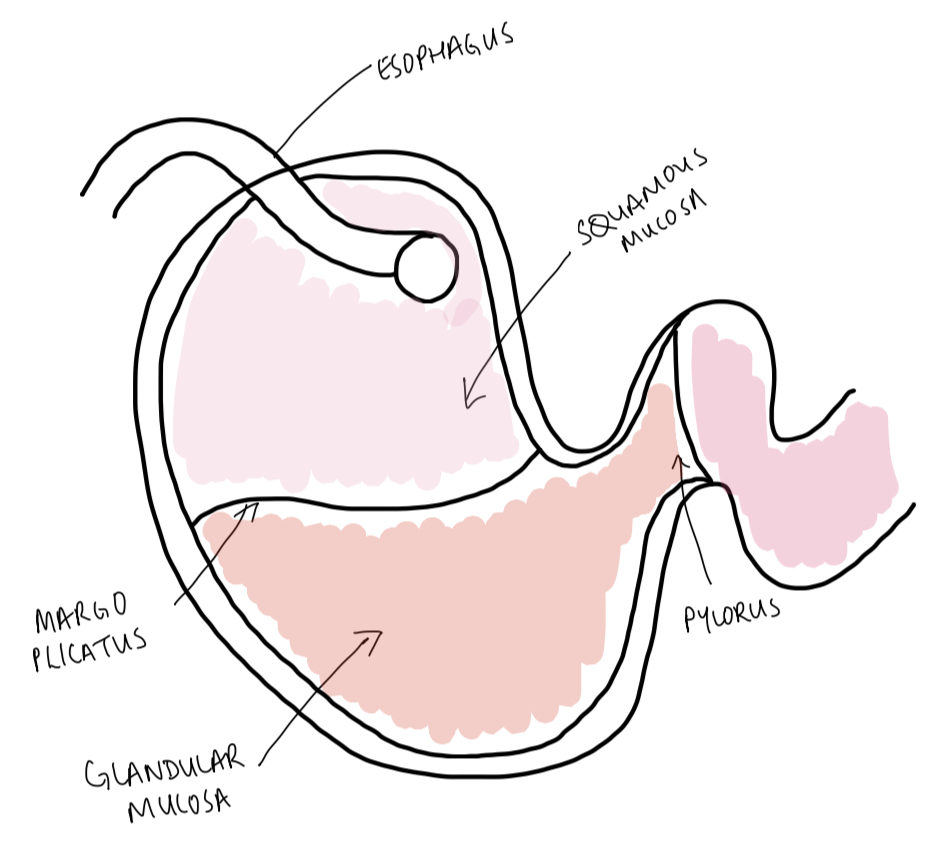 Basic knowledge of the anatomy of the stomach helps with understanding the proper stomach health and function.

The stomach of the horse is divided into a squamous (upper) region and a glandular (lower) region.

There is a distinct border called the margo plicatus separating both the squamous and glandular regions. 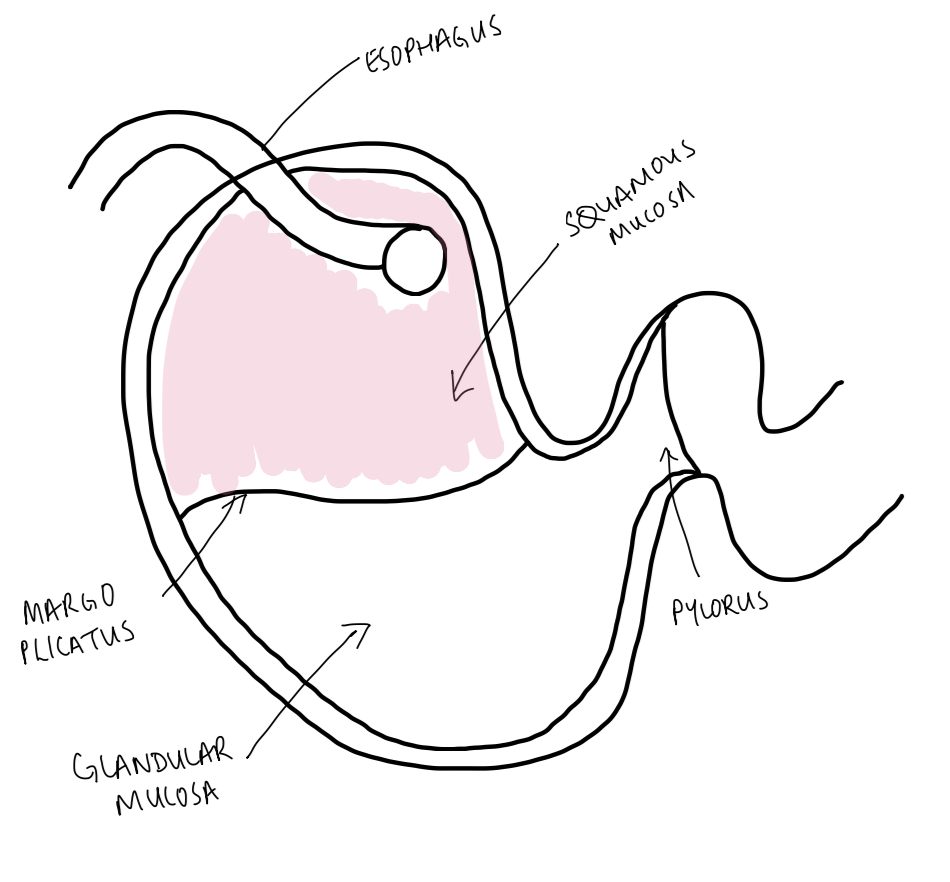 Equine Gastric Squamous Disease (EGSD) is a condition that is relatively well understood. We know a lot about Equine Squamous Gastric Disease and most of what you will have read previously, is probably  about squamous disease.

So why does squamous disease occur ? The top half of the stomach is covered by this squamous mucosa. It’s a little similar to the lining of your mouth. If we take this squamous mucosa and we add acid to it, ulcers develop. So it’s essentially ESGD is acid getting onto to a tissue that’s not designed to be covered by acid, has limited defense mechanisms against acid and where the acid has a corrosive and burning effect. It’s very similar to heartburn in man. Hydrochloric acid is thought to be the main reason damage occurs but things like volatile fatty acids (VFA), lactic acid and even bile acids can play a role if horses are fasted during the day time.

As horses start to eat, they also produce huge quantities of saliva – over 100 liters a day! Saliva contains bicarbonate and that acts to neutralize the horse’s stomach. So the acidity isn’t there continuously when a horse has access to feed. Food is very important because it serves as a physical barrier, preventing the acid that’s in the ventral part of the stomach from splashing up during exercise.

When we exercise our horses, they squeeze their abdominal muscles and this physically reduces the volume or the space of the bottom half of the stomach. This cases the acid to be pushed upwards into the top half of the stomach (squamous mucosa) where it’s not meant to be. Remember when we said the squamous mucosa is like the lining of our mouth and has limited defence mechanisms against this acid splash ? This exposure occurs mainly at at the trot or faster. There’s actually little difference between a trot and a gallop in terms of the acid exposure to the squamous mucosa. However, one factor that is very important is the duration of acid exposure. The length of time which we exercise horses is going to have a significant impact upon the time that the acid is spent physically pushed up where it doesn’t belong causing damage to the squamous mucosa.

Squamous disease is what we call a multifactorial problem, meaning that most of the time you can’t actually identify what individual risk factors has caused the ulcers to form in a particular horse.

If you ask Dr. Google you will find a whole array of different factors which are potentially associated with squamous gastric disease but these factors dwarf  in comparison to the impact of diet and exercise on squamous disease risk.

Some important clinical signs include :

Recurrent colic, which is frequently thought to be a sign of gastric ulcers actually occurs quite infrequently – in approximately 1-3% of horses.

Gastroscopy is the only definitive way to diagnose gastric ulcers. A general protocol includes witholding feed from horses for about 8-12hrs beforehand. With a little bit of sedation and using our 3.3m wireless Endo-i gastroscope the procedure is usually complete within 10-15mins. Horses will often be eating around about 30 minutes later. Horses seem to tolerate the procedure very well.

We are the first equine practice in Australia to to use the Endo-i wireless gastroscope allowing us to scope your horse on your property without the need to transport them to a hospital.

Treating squamous disease is pretty simple and centers around acid suppresion which allows the ulcers to heal. Recommendations for ESGD are centred on oral omeprazole formulations given once daily. Omeprazole is a drug which is known as a proton-pump blocker – ie. it turns off the pumps which produce the acid in the stomach.

The primary treatment recommendations are: buffered or enteric coated omeprazole formulations administered once daily approximately 30 minutes before feeding, following an overnight fast – which horses tend to do naturally.

When prescribing oral omeprazole for the treatment of stomach ulcers it should be noted that the absorption of omeprazole is reduced by the presence of food. We always advise that omeprazole is given on an empty stomach following a fasting period of minimum eight hours. This can be achieved by utilising the horse’s natural tendency to fast overnight, as unlike fasting during daytime hours, this is not considered to be counter intuitive.

Prevention of ESGD should be a combination of pharmacological treatment in the form of buffered or enteric coated omeprazole preparations every 24 hours as well as the important management changes to reduce the risk factors. These management changes should be tailored to the individual case and it is recognised that the more risk factors that can be reduced or eliminated, the lower the need for pharmacological treatment.

Changes in management are likely to have impact on the treatment success as well as a good chance of reducing the risk of recurrence of ESGD. Pasture turnout possibly lowers the risk of ESGD, which may be further lowered if turned out with a friendly companion, however the benefit of this should be evaluated on an individual case basis.

Feeding 2-3 litres of chaff, 30 minutes prior to exercise is considered helpful to maintaining a feed bolus which can help reduce the risk of gastric juice splashing onto the squamous epithelium. By doing this, all we’ve done is change the nature of the horse’s gastric contents. Instead of being liquid, we’ve now turned it into a stogy ball of chaff which hopefully limits the ability of the ‘splash’ ulcers to form. For this I would advise owners to use a two litre decapitated Coke bottle as it helps you appreciate the amount of chaff needed as well as keeping the amount consistent. Pre-exercise feeding might  also improve the blood supply to the stomach. In a study done on ponies, what they did was put ponies on a treadmill and they looked at the difference between starving and feeding them. They found that when you feed ponies you get a smaller reduction in blood supply to the stomach and the intestines which is really important because it helps to protect them.

We know that horses that don’t have access to roughage, have the greatest increase in the likelihood of developing ulcers. And we know that horses that are starved during the daytime are more likely to develop ulcers than horses that are starved at night. We recommend owners feed the 80-20 method. This means giving the horse 80% of its daily hay ration between 7:00 AM and 7:00 PM, and then 20% the remainder between 7:00 PM and 7:00 AM.

This maximizes the forage buffering effect within the stomach during the riskiest period, which is the day time.

We know that saliva buffers acid, and we know horses produce more saliva with a hay or a grass diet than you do with a grain or a pelleted diet. So make sure that most of your horse’s feed is made up of roughage compared to pellets or gran.

Some other points to consider include : 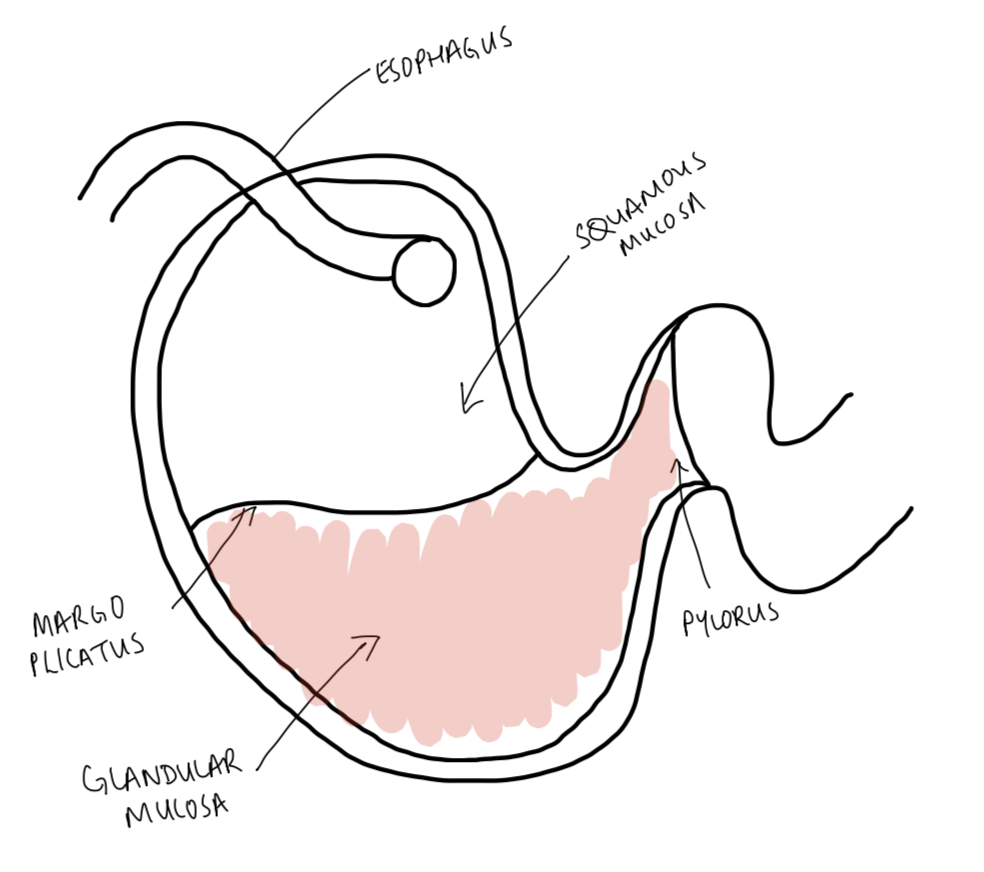 This disease is much less well understood and much less well-described. A few recent publications have shed light on which populations are affected and the risk factors that might be involved. We have very different strategies for managing glandular gastric disease than we do for squamous gastric disease.

We don’t call it a glandular ulcer disease, as what we’re seeing here are more inflammatory and erosive lesions that are causing our clinical signs.

The critical point here is that both diseases are not related. They both just happen to occur in the horse’s stomach.

What we know about squamous disease can’t be extrapolated to glandular disease –  they’re entirely different diseases, and we need to treat them as such in the way that we approach their management.

Why does glandular disease occur? Our current understanding is that EGGD is a reulst of breakdown of normal defense mechanisms. The muco-bicarbonate layer is usually very effective at protecting the glandular mucosa. This is a bit like an ‘alkaline slime’ that coats the glandular mucosa. This mucosa, unlike the squamous mucosa is used to living in an acid environment and usually has an effective defence mechanism. However, for reasons we don’t fully understand, these defense mechanisms breakdown.

If we want to stop glandular disease, we need to identify the different risk factors and we need to target them separately.  There is no effect of age, sex, seasonality, and there’s minimal data to support the role of diet in glandular gastric disease. This is very important. As previously mentioned, we know that squamous disease is a disease of the diet, particularly when we get to levels of high carbohydrate intake.

Glandular disease is not a disease of the diet and dietary modification in terms of managing the amount of carbohydrate in the diet is not going to change your risk of glandular disease.

In squamous disease, we previously said it’s a disease of how long the horse exercised for and was related to acid exposure. In glandular disease exercise plays a role, but it appears to be in a different mechanism. One particular study which looked at show jumpers in Canada found that horses that were exercising six or seven days a week were three and a half times more likely to have glandular disease than horses that exercise five days or less.

As EGGD is not thought to be caused by acid injury there is currently no indication that the use of oral omeprazole alone will provide any preventative benefits.

Further research into both conditions will help us improve the management and treatment recommendations for horses diagnosed with EGUS. This is especially important for EGGD. Stay tuned as we will post research updates as they become available.

Wireless Gastroscopy is available on-farm for your horse, without the need to transport them to a hospital.

Doucet MY, Vrins AA, Dionne R, et al. Efficacy
of a paste formulation of omeprazole for the treatment of naturally occurring gastric ulcers in training standardbred racehorses in Canada. Can Vet J. 2003 Jul; 44(7): 581–585