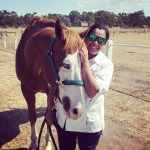 In humans, research on the gastrointestinal microbiome has been linked to a range of disease and conditions from obesity to anxiety and autism. Researchers have taken faecal microbiome from overweight humans and transplanted it into ‘germ-free’ mice in the laboratory, these mice began to gain weight quite dramatically, without any changes to their diet.

Scientists have only been studying equine gut microbiome since the early 2000s, and are still improving the techniques they use to examine it. The equine microbiome is a population of bacteria, viruses, fungi and protozoa that are present in the horse. The largest number are found in the small and large intestine, but smaller numbers are also present in nasal passages, lungs and skin. Horses cannot live without their microbiome as it helps perform several vital functions such as digestion, vitamin production and immunity. Each horse has a unique microbiome that is first determined by its DNA. The horse’s microbiome is very different from other species and it’s likely that age, gender, diet and geography will impact the microbial population.

Horses are first exposed to microorganisms in the birth canal, the mare’s colostrum and the environment. We know that horses’ gut microbiome can change rapidly with dietary adjustments, potentially leading to colic. Researchers from the University of Liverpool and the University of Leicester conducted a year-long study, they found that pasture-kept horses’ microbial populations are in a slow, but constant state of change in response to multiple factors, including season, climate and the type of forage they’re eating.

We know that horses’ gut microbiome can change rapidly with dietary concentrate or forage adjustments, potentially leading to colic.

Another team of researchers collected faecal microbiome samples from 26 mares pre and post-foaling, 50% of which went on to develop colic after foaling. They found that the composition of the mares’ gut microbiome were notably different post-partum. The team also identified differences between the colic group and the non-colic group of mares, as such they found certain families of bacteria that could be important in future tests to predict and prevent colic in the post-foaling mare.

A very recent (July 2020) study looked at the effect of using omeprazole to prevent the development of gastric ulcers in horses receiving phenylbutazone (bute). Interestingly, they found that using both these medications simultaneously was associated with an increase in intestinal complications. One theory suggested by the authors is that intestinal complications observed may be due to exacerbation of bute-induced ‘dysbiosis’ (microbial imbalance). Both anti-inflammatories and omeprazole can alter the fecal microbiome in people. Although omeprazole has not been demonstrated to alter the fecal microbiome when used alone in horses, anti-inflammatories have been shown to decrease diversity and decrease numbers of specific gut bacteria. It is not common practice in human medicine to prescribe omeprazole concurrently with anti-inflammatory medications.

What about commercial probiotics ?

We get asked about probiotics A LOT! Here’s my thoughts on the subject. Even though probiotics have shown promise in the treatment of some diseases in humans, the evidence that they can be used to control diseases in horses is very weak. The aim of developing 1 probiotic to aid in prevention or treatment of all diseases is unrealistic. Each bacterial strain has diﬀerent eﬀects. The choice and combination of strains for a therapeutic formulation needs to be speciﬁc for each disease and each horse. Based on lack of regulation regarding quality control of commercial probiotics, use of over-the-counter products is questionable, particularly in the absence of scientiﬁc information on safety and clinical eﬃcacy. Before we recommend the use of any over-the-counter probiotic, we would want to see eﬃcacy trials conducted and published in peer-reviewed journals.

The equine microbiome is an exciting area of research. We know how important it is to our own health and it certainly plays a bigger role to our horse’s health than we first realised. We still have a long way to go to fully understand what is ‘normal’ and what is not. There is a lot more to learn which could impact how we care for our horses in the future.